What is the Mother Divine Program and what are the requirements for joining?

The Mother Divine Program is an advanced program for developing higher states of consciousness. The program was inaugurated in 1981 to create an opportunity for ladies to focus on realizing their full potential—enlightenment—and to simultaneously radiate a powerful influence of harmony and peace throughout the world.

This is achieved through extended collective practice of Transcendental Meditation®  and its advanced programs, which enrich all areas of life from its universal basis, the silent field of pure consciousness.

Why are you called the Mother Divine Program?

In the Vedic Tradition, the name “Mother Divine” refers to the nourishing, evolutionary power of Natural Law lively within all of creation and within the silent consciousness of everyone.

Who joins the Mother Divine Program?

Students, businesswomen, artists, educators—more than 1,000 ladies from 40 countries with a wide range of professional and educational backgrounds— have spent time on the Mother Divine Program. The group is diverse yet shares the common purpose of developing higher states of consciousness.

How much time does one generally spend on the Mother Divine Program?

Our alumnae have expressed that time spent on the Mother Divine Program has created extra layers of inner silence, bliss, and refinement that enrich every aspect of their lives.

Those who are unable to come for six months or longer may experience the heavenly atmosphere of Mother DivineSM groups by coming to our campus for our Taste of Blissful Life courses, Meditator Retreats, and World Peace Assemblies. Ladies are also invited to join Mother Divine staff for a month or more. 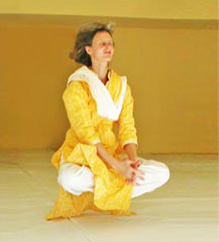 Every part of our daily routine has been specially designed to most rapidly unfold the inner fullness of life.

Extended practice of  Transcendental Meditation and its advanced programs, including Yogic Flying, is balanced with opportunities for ladies to use their skills and talents to further Mother Divine’s goal of enlivening bliss, harmony, and peace for the world.

The alternation between deep transcending and dynamic activity naturally supports the development of higher states of consciousness.

Where is the Mother Divine Program located?

We have lived all over the world since our group was founded in 1981. We participated as a group in international World Peace projects in Switzerland, Italy, France, Holland, India, Thailand, the Philippines, and Puerto Rico, before coming to the United States in 1992.

The Mother Divine groups in North America are in the Catskill Mountains of New York and in Maharishi Vedic City, Iowa.

What are your accommodations?

As a member of the Mother Divine Program, you will enjoy comfortable accommodations and delicious organic vegetarian cuisine, prepared in accordance with the principles of Maharishi Ayur-Veda® to create balance in the physiology and promote perfect health.

You will be inspired and delighted by the beauty of nature and the deeply silent, vibrant air that permeates the abode of the Mother Divine Program.

How can I receive additional information or apply?

How is the Mother Divine Program supported?

The Mother Divine Program is supported by generous donors who appreciate the far-reaching influence of this peace-creating group. In addition to financial contributions, there are many ways to support the Mother Divine Program. If you would like information about supporting Mother Divine through matching gifts, bequests (estate planning), honorary or memorial gifts, or donating stock, real estate, or equipment, please contact the donations office in the United States.

Donations of time and expertise are also welcome!

Our goal is to establish Mother Divine groups in all parts of the world, to offer ladies everywhere the opportunity to grow in higher states of consciousness, and radiate a powerful influence of coherence and bliss to every country. If you are interested in establishing or supporting a Mother Divine group in your country, please contact us.

Women can also choose to join a Matri Mandala circle to gain more knowledge while supporting the Mother Divine Program.

What is the Transcendental Meditation technique?

The Transcendental Meditation technique is a simple, natural, effortless mental procedure that is practiced  morning and evening, while sitting comfortably with eyes closed.

During this technique the individual’s awareness settles down and experiences a unique state of restful alertness; as the body becomes deeply relaxed, the mind transcends all mental activity to experience the source of thought—Transcendental Consciousness.

This process can be likened to a river which naturally and effortlessly flows on to the ocean and gains the status of the ocean.

The experience of Transcendental Consciousness develops the individual’s latent creative potential while dissolving accumulated stress and fatigue. This experience enlivens within one’s awareness creativity, dynamism, orderliness, and organizing power, which results in increasing effectiveness and success in daily life.

Scientific research validates the wide range of benefits of Transcendental Meditation for the health of mind and body, including decreased risk of heart disease, increased IQ and brain wave coherence, and younger biological age. Review the full range of benefits.

Transcendental Meditation can be easily learned by anyone. People of all ages, and of diverse cultural, religious, and educational backgrounds, practice this technique.

What is the TM-Sidhi program?

The Transcendental Meditation technique allows the mind to settle down naturally and effortlessly to experience pure consciousness—the Self—the silent inner reservoir of creativity and intelligence that underlies all our mental activity. The Transcendental Meditation Sidhi Program cultures the ability to think and act from that profound inner silence so that thoughts and actions are maximally effective.

Scientists have discovered that brainwave coherence during Yogic Flying is maximum at the point of lift-off. Increased coherence in brain functioning has been scientifically correlated with increased intelligence, creativity, concept learning, moral reasoning, and mind-body coordination.

Most significantly, more than 50 published scientific studies have shown that when the Yogic Flying technique is practiced in large groups, a powerful influence of coherence and harmony radiates into the surrounding population, neutralizing societal stress and tension, and promoting positive social trends. By effectively defusing social stress, the group practice of the Transcendental Meditation Sidhi Program has been scientifically shown to lower crime and prevent social conflict, thereby contributing to a more peaceful and harmonious world.

Enjoy from the comfort of home

For women practicing TM or the TM-Sidhi Program