Creating a Global Influence of Coherence

Establishing Peace-Creating Groups to Eliminate the Underlying Cause of Conflict

Transformation at the Deepest Level of the Human Mind and Physiology

The whole world is our family. It is our heartfelt wish to see everyone in every nation living in peace and prosperity, free from the threat of crime, terrorism, and war.

Even though there are many sincere individuals and organizations dedicated to the cause of peace, establishing permanent peace requires more than political agreements, discussions, or attempts to maintain a peaceful mood. Permanent peace can only be achieved through a transformation at the deepest level of the human mind and physiology.

When individuals practice the Transcendental Meditation technique and the advanced Transcendental Meditation Sidhi Program®* together in groups, they create powerful waves of coherence and peace that spread throughout the environment. The research on this effect has shown a dramatic and immediate reduction in societal stress, crime, violence, and conflict and an increase in positivity in the society as a whole, nationally and internationally.

The reduction of violence and conflict through the group practice of the Transcendental Meditation and Transcendental Meditation Sidhi programs is the most extensively researched and thoroughly field-tested phenomenon in the history of the social sciences. It has been confirmed by more than 50 demonstrations and 23 scientific studies. This research has been carefully scrutinized by independent scholars and accepted for publication in top peer-reviewed academic journals.

*The Transcendental Meditation technique and its advanced techniques were brought to the world by Maharishi Mahesh Yogi. Please enjoy our Founder’s Page for more information about Maharishi’s contributions to our world.

Ending the Epidemic of Stress and Violence in our Society

The individual influences the surroundings through every thought, word, and action. People who are calm and happy naturally radiate a peaceful, coherent influence in their surroundings. When many people in a society are unhappy and tense, the atmosphere becomes saturated with stress — crime, terrorism, and war are the inevitable result. As long as many individuals in a society are filled with stress and tension, peace can only remain an abstract and fragile idea.

The simplest, most cost-effective way to end the epidemic of stress and violence in our world is to create permanent groups of individuals practicing the advanced programs of Transcendental Meditation together morning and evening. These groups will silently neutralize social stress and maintain an influence of positivity and coherence in the collective consciousness of any city, province, or nation.

To produce the desired effect, the number of individuals required is equal to the square root of one percent of the population.

A group of 8000 together in one place would create sufficient life-nourishing coherence to neutralize the negative tendencies of the whole world’s population and create world peace.

The Mother Divine Program, established in 1981, is one of the most long-standing permanent peace-creating groups in the world. In their professional peace-creating role, the Mother Divine participants are silently radiating a powerful, nourishing influence of coherence in world consciousness every day through their extended practice of Transcendental Meditation and its advanced programs. The goal is to create a group of 1000 Mother Divine on each continent to benefit the whole world most profoundly.
Open the tabs below to learn more.

How does it work?

Progress in theoretical physics has led to an increasingly more unified understanding of the laws of nature, culminating in the recent discovery of a single, universal, unified field of intelligence at the basis of all forms and phenomena in the universe. Millions of times more fundamental and more powerful than the nuclear force, the unified field is the ultimate source of the order that gives rise to and maintains our vast universe. Theoretical and empirical investigation reveals that the unified field is fundamentally a field of consciousness. 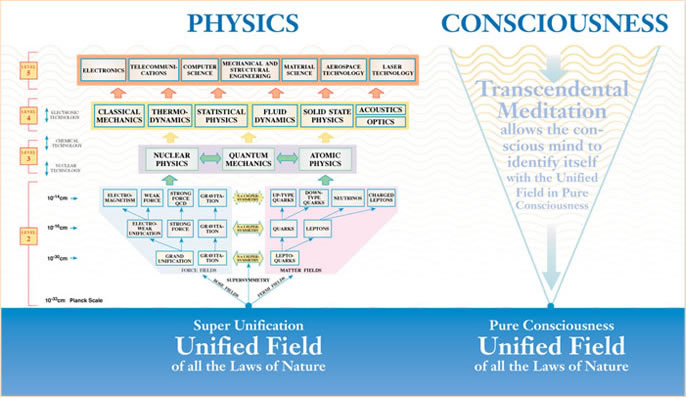 The Transcendental Meditation technique allows the mind to settle down and experience the source of thought, pure awareness, or the unified field of all the laws of nature. The TM-Sidhi program including Yogic Flying cultures the ability to think and act from this level, where thoughts are most powerful and easily fulfilled.

When individuals practice the Transcendental Meditation technique and the TM-Sidhi program together in groups, they create powerful waves of coherence that spread throughout the environment. The research on this effect has shown a dramatic and immediate reduction in societal stress, crime, violence, and conflict and an increase in coherence, positivity, and peace in society as a whole, nationally and internationally.

The unique effectiveness of this approach has been confirmed by more than 50 demonstrations and 23 scientific studies. The research has been carefully scrutinized by independent scholars and accepted for publication in top academic journals.

The unique effectiveness of the group practice of Transcendental Meditation® and the Transcendental Meditation Sidhi Program® in preventing social violence, terrorism, and war, has been confirmed by more than 50 demonstrations and 23 scientific studies. This research has been carefully scrutinized by independent scholars and accepted for publication in top academic journals. In every case, this approach produced marked reductions of crime, social violence, terrorism, and war, and increased peace and positivity in society.

A critical experimental test of this approach was conducted during the peak of the Lebanon war. A day-by-day study of a two-month assembly in Israel in 1983 showed that on days when the number of participants in this unified field-based approach to defense (‘TM Group Size’, right) was high, war deaths in neighboring Lebanon dropped by 76% (p < 10-7 ). In addition, crime, traffic accidents, fires, and other indicators of social stress in Israel (combined into a composite index) all correlated strongly with changes in TM group size. Other possible causes (weekends, holidays, weather, etc.) were statistically controlled for (Journal of Conflict Resolution 32: 776-812, 1988).

These results were subsequently replicated in seven consecutive experiments over a two-year period during the peak of the Lebanon war. The results of these interventions included:

war-related fatalities decreased by 71% (p<10-10)
war-related injuries fell by 68% (p<10-6)
the level of conflict dropped by 48% (p< 10-8)
cooperation among antagonists increased by 66% (p < 10 -6)
The likelihood that these combined results were due to chance is less than one part in 1019, making this effect of reducing societal stress and conflict the most rigorously established phenomenon in the history of the social sciences (Journal of Social Behavior and Personality17(1): 285-338, 2005).

In addition, the global influence on terrorism of three large coherence-creating assemblies was studied retrospectively through an analysis of data compiled by the Rand Corporation. The data revealed a 72% reduction in worldwide terrorism during the three assemblies taken together, as compared to all other weeks during a two-year period. Each assembly had approached or exceeded the participation threshold (8,000) predicted to create a global influence of peace. The study ruled out the possibility that this reduction in terrorism was due to cycles, trends, or drifts in the measures used, or to seasonal changes (Journal of Offender Rehabilitation 36 (1-4): 283-302, 2003).

A National Demonstration Project conducted in Washington D.C. from June 7 to July 30 1993, tested the efficacy of this approach for reducing crime and social stress and improving the effectiveness of government.

In this carefully controlled experiment, the coherence-creating group increased from 800 to 4,000 over the two-month period. Although violent crime had been steadily increasing during the first five months of the year, soon after the start of the study, violent crime (measured by FBI Uniform Crime Statistics) began decreasing, and continued to drop until the end of the experiment (maximum decrease 23.3%), after which it began to rise again. The likelihood that this result could be attributed to chance variation in crime levels was less than two parts per billion (p < 0.000000002). The drop in crime could not be attributed to other possible causes, including temperature, precipitation, weekends, and police and community anti-crime activities (Social Indicators Research 47: 153-201, 1999).

These are just a few of the more than 50 scientific demonstrations and 23 published studies on this unified field-based approach to peace. These studies are backed by more than 600 other published studies conducted at over 250 independent universities and research institutes in 33 countries on the individual and societal benefits of these unified field-based technologies of consciousness.

Enjoy from the comfort of home

For women practicing TM or the TM-Sidhi Program